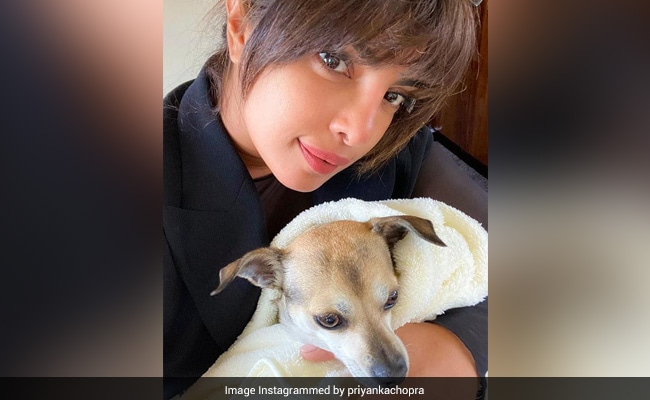 Priyanka Chopra, in an interview with ET Online, revealed there are certain aspects of her work life she doesn’t miss any longer and that she and her husband Nick Jonas have been extra careful about practicing social distancing in the past few months. Speaking to ET Online, Priyanka said traffic is just one of the things she’s glad to not have encountered in the past few months: “I don’t miss being stuck in traffic and going to meetings.” When it comes to virtually attending meetings, Priyanka simply throws on a formal shirt over her loungewear. “I’m actually really grateful to be able to wear sweatpants with, like, a formal shirt and, you know, do an interview,” she said.

In an Instagram post earlier, Priyanka had actually shared a glimpse of her look for a Zoom meeting and she somewhat looked like this. That’s pretty cool.

The 38-year-old actress has been living with Nick Jonas at their home in Los Angeles. She recently resumed work on sets, for which she flew to Europe. Priyanka said the couple have been extremely cautious about following social distancing rules because of their medical conditions: “We’ve been very, very safe actually, because Nick is Type 1 (diabetic), and I’m asthmatic. So, you know, we’ve just been super careful about who we interact with and how we do it.”

Earlier this week, Priyanka checked in on Instagram from “Europe somewhere” and revealed she’s joined work after completing her quarantine period. In the ETOnline interview, she said while the past few months have been “very productive”, “The idea of tangibly being back on set is, like, crazy.”

Priyanka Chopra has a series of upcoming projects lined up. She had wrapped up the shoot of Netflix film The White Tiger last year, which is yet to announce a release date. She also has Netflix’s superhero film We Can Be Heroes and a film with actress-comedian Mindy Kaling. Priyanka has also been reportedly roped in as part of the cast of Matrix 4. Priyanka had also announced a sangeet-themed show with Nick Jonas for Amazon. She’s also producing the upcoming Netflix film Evil Eye.

Sanjay Dutt, Set To Resume Work, Says, “Will Be Out Of This Cancer Soon”

Priyanka Chopra in a throwback from Miss World 2000 (courtesy priyankachopra)Highlights"I had tears streaming down my eyes," Priyanka's mom said in a video "When...
Read more