On A Suitable Boy Director Mira Nair’s Birthday, A Pic Of Ishaan Khatter “Being Mollycoddled By Her” 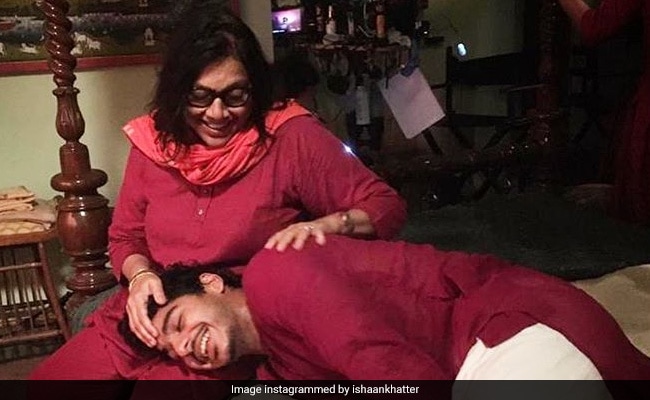 On A Suitable Boy director Mira Nair’s birthday, Ishaan Khatter, who plays the role of Maan Kapoor in the series, posted a set of photos to wish her. One of the pictures features the 24-year-old actor being “mollycoddled” by the director after “being mauled and tossed around for hours” on the set. “Happy birthday, Mira di. May you always have the lust for life and extraordinary drive to tell stories,” wrote Ishaan in his birthday post, adding: “Picture two is me being mollycoddled by her after being mauled and tossed around for hours. All in service of the scene, thankfully.”

A Suitable Boy is director Mira Nair’s adaptation of Vikram Seth’s sprawling novel of the same name. Set in the post-Partition era, the series features Ishaan as Maan Kapoor, who is infatuated with a courtesan named Saeeda Bai (played by Tabu). The story revolves around a young woman, whose mother wishes to find “a suitable boy” for her. The series features Tanya Maniktala as Lata, Mahira Kakkar as her mother Rupa Mehra, Rasika Dugal as Lata’s sister Savita Kapoor, Vijay Varma as Rasheed (a tutor for Saeeda Bai’s sister), Randeep Hooda as Billy Irani, Vivek Gomber as Arun Mehra (Lata’s elder brother), Ram Kapoor as Mahesh Kapoor (a renowned politician and father of Maan Kapoor), Shahana Goswami as Meenakshi, among many others.

The series, which premiered on BBC One in July, will release on Netflix on October 23.

In terms of work, Ishaan Khatter made his debut as an actor with Majid Majidi’s Beyond The Clouds. He then featured in Shashank Khaitan’s Dhadak. The actor was last seen in Khaali Peeli, co-starring Ananya Panday.

Customer Engagement Marketing: A New Strategy for the Economy