“Hope Our Parents Don’t Read It” 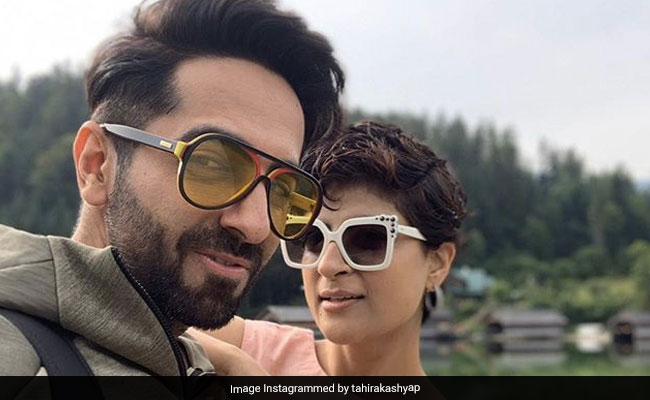 Ayushmann and Tahira in a cute pic (courtesy tahirakashyap)

Ayushmann Khurrana dedicated a video to his wife Tahira Kashyap applauding her new book The 12 Commandments Of Being A Woman. In the video, he addressed Tahira and said: “What do I tell you about this girl. You have such a beautiful, hot mind, Tahira. I envy the way you think.” Ayushmann, known for his signature sense of humour, added and ROFL touch to his video and said: “The kind of revelations that you made in this book are completely insane. I just hope humare ma-baap na padhe kitaab (I just hope our parents don’t read this book).” For those who are eagerly waiting to get their hands on the book, Ayushmann said they can go ahead by all means “Because it won’t be embarrassing for them for sure.”

Tahira shared the video on her wall with an equally hilarious caption: “Hot mind? Ok then… hitting the gym right away…to check you out! What did you think? Workouts are always going to be at my own pace and space (mostly in the head). Twirl the moustaches for me na next time.”

Tahira Kashyap and Ayushmann Khurrana, who marked 19 years of togetherness this year, got married in 2008 after dating for several years. Tahira has also teased some of the “insane” revelations which Ayushmann referred to in his post. Tahira said her “favourite make-out spot” was in the cinemas while watching Shah Rukh Khan’s films. The cover of The 12 Commandments Of Being A Woman features a personal note from SRK, which says this: “I’m not sure if I should be happy or offended that Tahira’s favourite make-out spot was in the cinema watching my movies. This wonderful book is full of many such gems that will make you laugh as much as I did.”

The 12 Commandments Of Being A Woman is Tahira Kashyap’s fourth book as an author. She made her writing debut with I Promise in 2011 and also the novel Souled Out to her credit. She has also co-authored husband Ayushmann Khurrana’s biography Cracking The Code: My Journey In Bollywood.

IRFANhttps://allnewspro.com
Previous articleDia Mirza And Sonu Sood To Co-Host Documentary Series On COVID-19 Heroes
Next articleHow Shilpa Shetty Reacted When Raj Kundra Proposed To Her With A 5 Carat Diamond Ring

Gigabyte GeForce GTX 950 Review: Pricing is Not Always the Only Criteria

Neha Kakkar And Rohanpreet Singh Sing Out Their Love Story

Disha Patani in a still from the video. (courtesy _tigsha)HighlightsTiger Shroff released 'Unbelievable' last month Disha posted a video of herself...
Read more