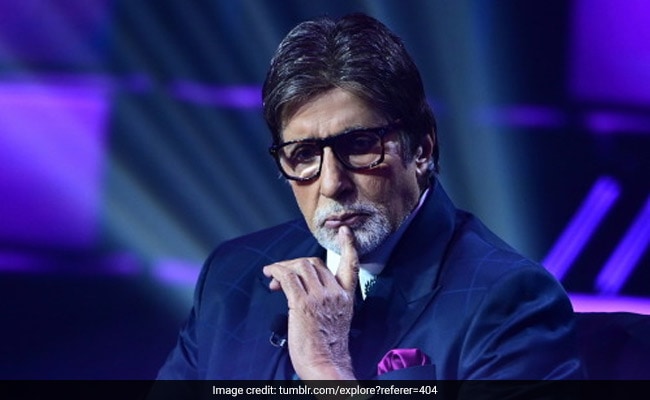 Thursday’s episode of Kaun Banega Crorepati 12 turned out to be quite an eventful one. Amitabh Bachchan played with three contestants on Thursday’s episode of the show. First was the roll over contestant Ashish Sharma, who took home a prize money of Rs 1.6 lakh; second was the Aakansha Pandey from Madhya Pradesh, who won Rs 60,000 and quit the game. The third contestant turned out to be a businesswoman from Kolkata Runa Saha, who broke down when she was welcomed on the hot seat and had to be consoled by not only her daughter and husband but also Mr Bachchan.

Episode 14 of Thursday’s episode of Kaun Banega Crorepati 12 made way for an interesting conversation between Mr Bachchan and expert advisor Richa Anirudh. When one of the contestants said that the lockdown kept her busy with household chores, Richa Anirudh asked Mr Bachchan if he participated in household chores during the lockdown months. Mr Bachchan, in response, said that he’s not a cook but he did cleaning chores during the lockdown and still does. “Bilkul. Sab kaam kiya maine. Jhaadu pochha. Khaana humko pakana nahi aata. Aaj tak kar rahe wo. Seriously bol raha hun main (Absolutely. I did everything. Jhaadu pochha. I can’t cook. I still am doing. I am saying this seriously).”

Big B added that participating in house tasks made him realise the value of house helps.

Here are some of the questions from Thursday’s episode of Kaun Banega Crorepati 12:

# What is the state animal of Himachal Pradesh?

# The Indian national calendar is based on which era?

# At the beginning of a chess game, each player controls how many pieces?

# Bhopal in Madhya Pradhesh and Udaipur in Rajasthan is known by which of these names?

# Among the river bank sides of the Kumbh Mela, which is the only river on the banks of which two Kumbh Melas are held?

# Who is known as the ‘Father Of Medicines’ in the Western World?

# Rahul Banerjee, Dola Banerjee and Bombayla Devi have all won

Commonwealth gold medals in which sport?

# Which of these positions is common in hockey and soccer?

Watch this space is for more updates on Bigg Boss 14.

IRFANhttps://allnewspro.com
Previous articlePulkit Samrat, Harshvardhan Rane, Jim Sarbh Cause Bloodshed At A Wedding
Next article“Bhanu Athaiya, You Will Be Missed,” Tweets Aamir Khan, Who Worked With The Oscar-Winning Costume Designer In Lagaan

The Trial Of The Chicago 7 Review: A Triumph From Start To Finish

Mirzapur Cast Thanks Fans Ahead Of Season 2

Mirzapur 2 is set to premiere on October 23 (courtesy yehhaimirzapur)Highlights"Every day there is a new meme, a new thing," said Divyendu Sharma "They...
Read more
Movies