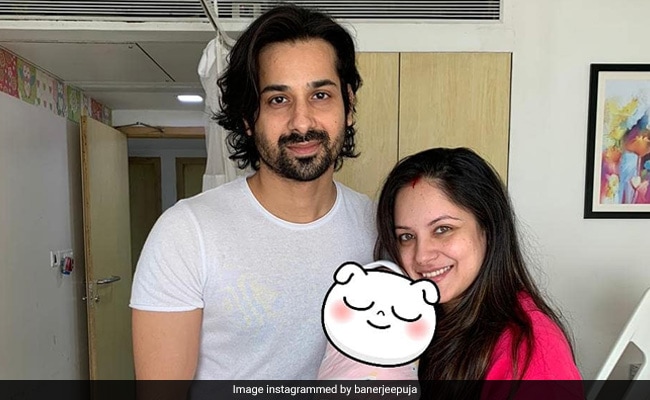 Actress Puja Banerjee, who welcomed her first child with husband and actor Kunal Verma last week, revealed in her latest Instagram post that her little son was moved to newborn intensive care unit (NICU) after the delivery because of “some breathing issues.” The actress posted a photo of herself and Kunal holding their little munchkin and shared that she only saw her baby for a couple of seconds before he was taken to NICU and met him for the “first time” after three days. “On October 9th, we reached the hospital early morning after a sleepless night full of excitement, anxiety, happiness and all mixed emotions as we were about to see our baby for the 1st time and we were very much prepared to welcome him in this world,” Puja wrote in her post.

She added: “As per previous discussion with the doctors my husband was supposed to be inside the OT with me for my moral support during the surgery but due to this unfortunate corona situation, he wasn’t allowed and I had to go for it alone…The surgery started and within a few minutes I could hear his 1st cry but I could hardly see his face as they took him to clean. I was thrilled and awaiting to see him for the 1st time then they showed me his face finally for few seconds and said I will get to see him in the recovery room. Rest of the surgery got over and I kept waiting to see my baby properly but to my disappointment I came to know the baby was taken to NICU already because he got some breathing issues. My heart skipped a beat and I didn’t know how to react. Then our wait started, day 1, day 2. day 3…we both were running out of patience as we both didn’t even know how he looks cause we hardly saw him for a few seconds. Finally, after a lot of prayers on day 4th he recovered and was given to us and we met him for the 1st time.”

In her post, the actress also added that she will never be able to “forget those 3 nights without” her baby. She also wrote about her pregnancy experience.

In a separate post on Thursday, the actress shared a heart-warming post for husband Kunal and wrote: “A dedicated husband and now a devoted father… You mean the world to me and the way you took care of me I will never be able to do for you. Let us raise a wonderful human being together… Happy parenthood, my love.”

Puja Banerjee is best-known for playing the role of Parvati in the TV show Devon Ke Dev…Mahadev. She has also starred in shows like Qubool Hai, Sarvggun Sampanna and Tujh Sang Preet Lagai Sajna.

Kajal Aggarwal shared this photo (courtesy kajalaggarwalofficial)HighlightsKajal and Gautam Kitchlu will get married on October 30 Their wedding will be a private affair Kajal Aggarwal...
Read more