Sonu Sood Lost His Mother 13 Years Ago On This Day. His Heart-Wrenching Post 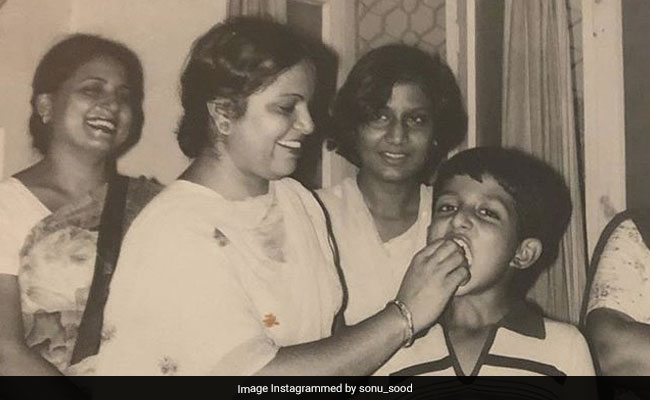 Actor Sonu Sood remembered his mother in a heart-wrenching post on Tuesday. Missing his mother, 47-year-old actor shared a black and white photo of her from his throwback treasury. “13 years ago on the same day, October 13… when life slipped from my hands. Maa,” Sonu Sood captioned his post. Sonu Sood lost his mother Saroj Sood in 2007. The actor’s father Shakti Sood died in 2016. Sonu Sood, who moved to Mumbai from Punjab with dreams of becoming an actor, wrote in a post last year: “Wish I could sit in a theatre with you and watch my film. The applause and whistles would have justified the time I had spent away from you during my struggling days.”

Here’s what Sonu Sood posted on his mother’s death anniversary:

On Teacher’s Day, Sonu Sood paid an emotional tribute to his mother:

Sonu Sood marked his mother’s birth anniversary by posting some of his favourite memories, writing: “Wish I could give you a tight hug and tell you how much I love you.”

Last year, after the success of Rohit Shetty’s film Simmba, Sonu Sood dedicated a post to his parents and wrote: “Today when I sit and attend congratulatory calls from so many people on the success of my new movie, there is one call I miss the most… A call from you both.”

In the past few months, when the country was in a state of lockdown, Sonu Sood became somewhat of a hero among stranded migrants for his efforts to send them back home. He had even offered his hotel in Mumbai for healthcare professionals to stay in. He is best known for his roles in films such as Paltan, Dabangg, Happy New Year, R… Rajkumar and Simmba.

IRFANhttps://allnewspro.com
Previous articleWhat Made Shilpa Shetty “Crazy And Excited” While Filming In Manali
Next articleWhen Malaika Arora, Geeta Kapur And Terence Lewis Were “Blessed With” One Helluva Meal By Farah Khan

A coffee break in the United States and elsewhere is a short mid-morning rest period granted to employees in business and industry. An afternoon...
Read more
Entertainment

Sign up Living with a mental health condition can be a dilemma. More so, when you cannot...
Read more
Movies