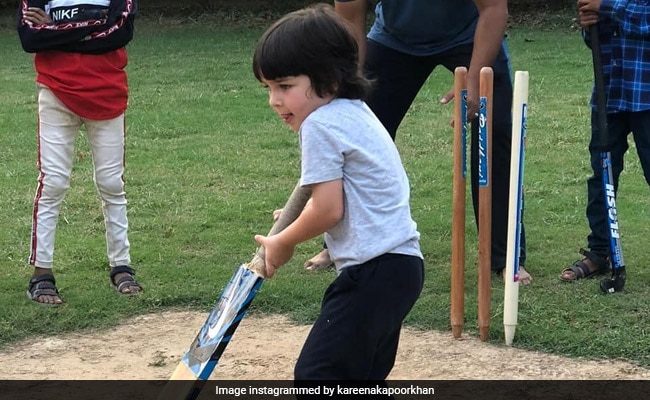 Kareena Kapoor’s latest Instagram post is just perfect for the IPL (Indian Premier League) season. On Tuesday evening, the actress posted a super cute picture of her 3-year-old son Taimur Ali Khan playing cricket. In the picture, Taimur looks super cute as he holds a bat as big as him in his hands. Kareena Kapoor jokingly added a caption to her post that read, “Any place in the IPL? I can play too.” The Internet was amused to see the picture and the comments section was filled up with remarks like, “Yes we need one new team with him as youngest owner. He is love” and “how cute, yea baby you will get the place in IPL.” Another Instagram user commented: “Tiger Pataudi,” referring to his late grandfather and legendary cricketer Mansoor Ali Khan Pataudi. Taimur’s brother Ibrahim Ali Khan (Saif Ali Khan’s son with Amrita Singh) also loves cricket and is spotted playing frequently.

Meanwhile, Kareena Kapoor, who is expecting her second child with husband and actor Saif Ali Khan, frequently shares posts from her maternity diaries, See some of her posts here:

Kareena Kapoor and her husband Saif Ali Khan shared the big news of their pregnancy in August, this year. “We are very pleased to announce that we are expecting an addition to our family. Thank you to all our well-wishers for all their love and support,” the couple said in a joint statement. The couple got married in the year 2012 and welcomed their first child Taimur Ali Khan in 2016.

IRFANhttps://allnewspro.com
Previous articleMahesh Babu’s Birthday Post For Ramesh Babu Is The Brother Of All Throwbacks
Next articleAnup Jalota Switches To Rap In His New Film With Jasleen Matharu

Niti Taylor shared this image. (courtesy nititaylor)Highlights"This is my second monthly anniversary gift to my better half," she wrote "I have fulfilled...
Read more
Movies

Hey Birthday Boy Ali Fazal, Are You Listening? Richa Chadha Wants You To…