wordpress-467062-1492607.cloudwaysapps.com
Home Movies Neetu Kapoor Rehearses To Ghagra Song, Netizens Are Curious If It's For...
Movies 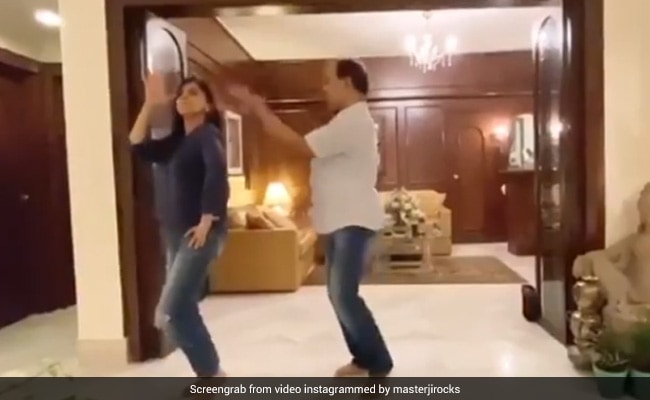 Neetu Kapoor in a still from the video (courtesy masterjirocks)

Neetu Kapoor found a spot on the trends’ list recently, all thanks to a video of hers dancing to the song Ghagra. The video was recently shared on Instagram by choreographer Rajendra Singh, who is primarily known for choreographing sangeet performances for celeb weddings. The video of Neetu Kapoor rehearsing to the song prompted netizens to enquire if she’s already prepping for her son Ranbir Kapoor and Alia Bhatt’s much anticipated wedding. Alia and Ranbir, who have been dating for quite some time now, often feature in speculative reports about a possible wedding. Neither Alia or Ranbir have responded to the rumours so far. Meanwhile on the Instagram video, comments such as these poured in: “Alia-Ranbir wedding?”, “Is it one of the dances for Ranbir’s wedding?” and “You have to dance at Alia-Ranbir’s wedding.”

Choreographer Rajendra Singh shared the video with a shout-out for Neetu Kapoor, who can be seen rehearsing to the peppy number. “Amazing dance choreography with the one and only my favourite Neetu Kapoor,” wrote Rajendra Singh. Ghagra, a dance number from Ranbir Kapoor’s 2013 film Yeh Jawaani Hai Deewani, originally featured Madhuri Dixit and Ranbir. Here’s the viral video netizens are going crazy about:

Alia Bhatt is very much part of the Kapoors family functions – she was spotted at the Kapoors’ Rakhi celebrations this year and was also part of the big fat Christmas celebrations. Alia had also accompanied Neetu Kapoor to Armaan Jain and Anissa Malhotra’s wedding reception in February. In April 2019, Alia featured in headlines for reports that the actress has already placed an order with designer Sabyasachi for her wedding lehenga.

IRFANhttps://allnewspro.com
Previous articleAkshay Kumar’s Laxmmi Bomb Trailer Gets A Whole Lot Of Love From Celebs
Next articleSalman Khan Can Take Off His Mask On Radhe Sets Because Of Behind-The-Scenes “Superheroes”

Shah Rukh Khan Was Asked If He Plans To Sell Mannat. His Reply

A Pic From Neha Dhupia And Angad Bedi’s Maldives Vacation

A Suitable Boy Actress Tanya Maniktala On Working With Director Mira Nair, Her Role And More

Tanya Maniktala shared this photo. (Image courtesy: tanyamaniktala )HighlightsTanya Maniktala played the role of Lata in A Suitable Boy "When someone like...
Read more

Shah Rukh Khan Was Asked If He Plans To Sell Mannat. His Reply

A Pic From Neha Dhupia And Angad Bedi’s Maldives Vacation

Neha Kakkar with Rohanpreet Singh. (courtesy nehudeewane)HighlightsNeha wore a silver lehenga for the reception Rohanpreet chose a blue suit The couple got married on...
Read more

A Suitable Boy Actress Tanya Maniktala On Working With Director Mira Nair, Her Role And More

Tanya Maniktala shared this photo. (Image courtesy: tanyamaniktala )HighlightsTanya Maniktala played the role of Lata in A Suitable Boy "When someone like...
Read more

Coolie No 1, Chhalaang And Durgavati Among 9 Films To Release On Prime Video. Details Inside

Sara Ali Khan and Varun Dhawan in Coolie No 1. (Image courtesy: varundvn)HighlightsCoolie No 1 will premiere in December The 9 films...
Read more
Movies

Manisha Koirala’s Vijaya Dashami Was All About Family, Love And Blessings. See Pics

Green in a concrete jungle

According to the United Nations, 75 per cent of our planet's land surface has been significantly altered by human...
Read more