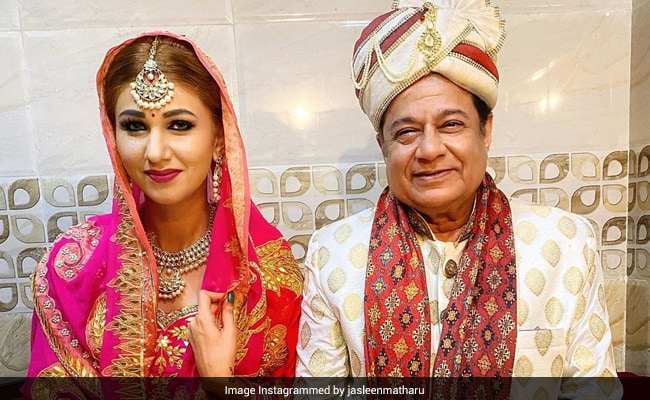 Former Bigg Boss contestants Anup Jalota, 67, and Jasleen Matharu, 30, occupied a top spot on trends’ list on Friday after a picture of them dressed as a married couple surfaced on the Internet. For those who didn’t watch Bigg Boss 12, Jasleen entered the house with Anup Jalota posing as his girlfriend. However, the duo later clarified that it was just a prank (more on that later). On Thursday, Jasleen posted the now viral photo on her Instagram profile with fire icons. In the picture, Jasleen looks like a bride in a pink suit-salwar and a heavy dupatta while Anup Jalota can be seen wearing a sherwani. Her post made the Internet curious, with several of her fans asking in the comments section if she really married the singer. However, many believes that the picture is a promotional stunt for their new film Woh Meri Student Hai.

One of the curious fans commented: “What is this? Married?” while another fan wrote: “Waiting for the movie, it’s going to rock.”

Here is the photo that is going viral on social media:

If you are wondering why a section of the netizens are talking about Anup Jalota and Jasleen Matharu’s film, here’s the reason – a couple of days ago, Jasleen posted a photo of herself and the singer and wrote: “Haaye finally, chalo kaam shuru. Shooting for my upcoming Hindi movie ‘Woh meri student hai’  with Anup Jalota.”

Jasleen, who is a student of the 67-year-old singer, called herself his girlfriend in the Bigg Boss house in 2018. However, towards the end of the show, they revealed that they were joking and that they only share a teacher-student relationship.

We would also like to inform you that according to an India Today report, Jasleen is currently dating a cosmetic surgeon named Abhinit Gupta. In an interview with the publication, she even revealed that it was Anup Jalota who introduced Abhinit to her.

IRFANhttps://allnewspro.com
Previous articleTaapsee Pannu, Holidaying In The Maldives, Is On A “Shredding Diet”
Next articleIrrfan Khan’s Wife Sutapa Sikdar Borrows A Louise Gluck Poem For A Post Dedicated To The Actor

Prithviraj Sukumaran shared this photo (courtesy therealprithvi)Highlights"I have gone into isolation," said Prithviraj "I am asymptomatic and am doing fine now," he added "All primary,...
Read more
Movies

Shweta Tiwari with daughter Palak. (courtesy Palaktiwarii)HighlightsShweta and Palak can be seen twinning in the pictures Shweta tested positive for coronavirus in...
Read more
Movies

“A Badass With A Big Heart,” Writes Shweta Tiwari’s For Daughter Palak On Her Birthday