Rahul Vaidya Vs Pavitra Punia In Furious War Of Words 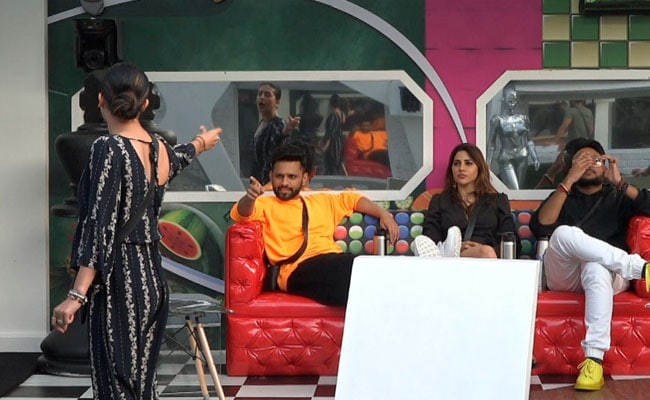 Day 5 in the Bigg Boss 14 house was another episode of drama, bickering and arguments. Rahul Vaidya and Pavitra Punia, who appear to have been getting stronger with their rapport, had a massive fight on Thursday’s episode. Pavitra, who was trying to talk to Rahul about sanitation concerns, was snapped at by the singer, which turned into a huge argument. Pavitra was giving a reminder to Rahul for ignoring littered tissues in the bathroom as he is in charge of the washroom duties. In order to retaliate, Rahul accuses Pavitra of preparing poorly cooked meals, which prompted her to ask him to not have those meals. As their spat continued to take an ugly turn, Pavitra further accused Rahul of flirting with the female contestants, which led to the two exchanging verbal threats.

However, this was not the only fight which Rahul Vaidya was part of on Day 5 of Bigg Boss 14 – he also picked a fight with Jaan Kumar Sanu over breakfast, saying Jaan should eat judicially, leaving enough for everyone. Nishant Singh also got dragged into the fight and yelled at Rahul, who mimicked his fellow housemate to shut him up.

Thursday’s episode of Bigg Boss 14 also showed the remaining portions of Sid’s Island task. The female contestants fought for immunity in this task and Siddharth Shukla declared Nikki Tamboli as the winner – she earned immunity and is safe from this week’s elimination. Shehzad Deol disrupted one of the tasks, which led Siddharth to reprimand him, accusing him of misbehaving with a female contestant.

Meanwhile, during the show Bigg Boss spotted Rubina Dilaik and Jasmin Bhasin alleging that Bigg Boss aims to “break” the contestants as they do not have all their essential items with them. Bigg Boss, in a strict tone, addressed the issue and gave Rubina Dilaik a chance to enter the house by forgoing immunity for this week. Rubina agreed to the deal and officially entered the house but is nominated for this week’s elimination.

Watch this space for more updates on Bigg Boss 14.

It was that period of a day in 2019 when the orange glow of the setting sun had faded...
Read more
Movies

Suhana Khan shared this photo. (Image courtesy: Suhanakhan2)HighlightsSuhana shared a photo of herself on Thursday In the picture, Suhana Khan can be...
Read more
Movies

25 Years Later, DDLJ’s Sheena Writes Of Taking The Role “For A Laugh And Paid Holiday”

Anaita, Kajol and Shah Rukh in a DDLJ still (Courtesy anaitashroffadajania)HighlightsAnaita played one of Kajol's friend in 'DDLJ' "This was my introduction to...
Read more