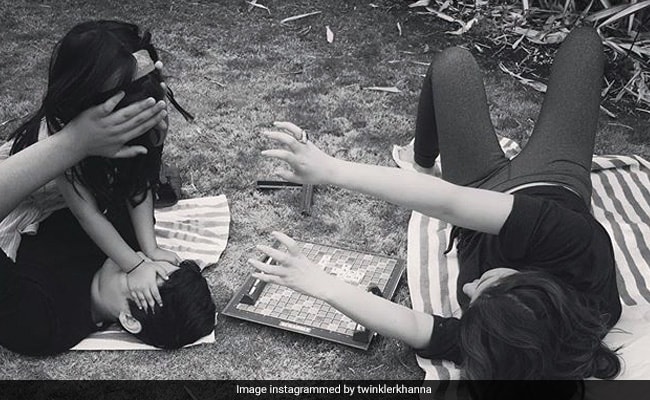 Twinkle Khanna, on Thursday, decided to relax with her children Aarav and Nitara but her “peaceful” moment soon turned into a “war zone.” The actress-turned-author posted a series of pictures to show how quicky she transitioned from “lazing peacefully on the grass” to being in the “midst of a war zone” after Aarav, 18, and Nitara, 8, got into a fight. The first photo features Twinkle and Aarav lying on different sheets laid out on the grass with a board game placed between them. In the second picture, Nitara can be seen joining her brother. The third image shows the siblings getting into a fight while Twinkle tries to stop them.

“Being a mom involves quick transitions – it’s a matter of seconds before you go from lazing peacefully on the grass into the midst of a war zone!” wrote Twinkle Khanna in the caption and added this hilarious hashtag – #MamaMiaHereWeGoAgain.

Recently, in a video for Tweak India, her digital venture, Twinkle Khanna and her husband, actor Akshay Kumar, revealed that Aarav is the best chef in the house. Take a look at the Tweak India video, in which the couple made many more ROFL revelations:

Twinkle Khanna has featured in several films like International Khiladi, Baadshah, Yeh Hai Mumbai Meri Jaan, Uff! Yeh Mohabbat and Joru Ka Ghulam  before she switched careers to become a best-selling author. Twinkle, who is now an author, a columnist, an interior designer and a producer, married Akshay Kumar in the year 2001.

Ankita Lokhande’s Caption Is A Mantra For The Ages

Ankita Lokhande shared this image. (courtesy lokhandeankita)HighlightsAnkita shared a set of pictures on Instagram She can be seen dressed in...
Read more
Uncategorized

If you think back to pre-pandemic days, you’d recall that Mumbai had a midnight cycling community that would hit...
Read more

What is Antigone’s lockdown dilemma?

If you've read Antigone, you would know that the Greek tragedy that Sophocles penned in 500 BC narrated a...
Read more