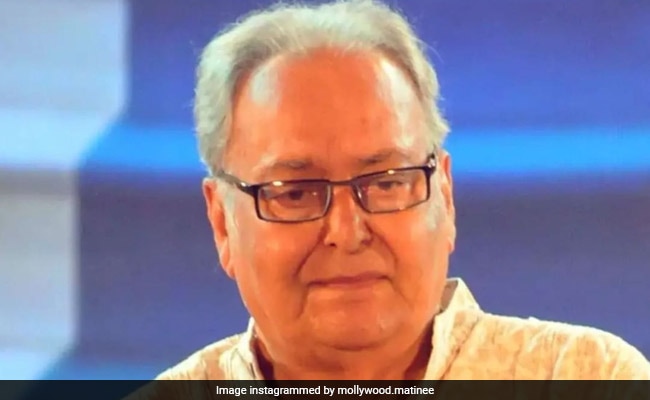 Legendary actor Soumitra Chatterjee, who was admitted to the Belle Vue hospital in Kolkata earlier this week, after he tested positive for coronavirus, is stable now and “did not experience any rise in his body temperature,” an official from the hospital told news agency PTI on Wednesday. “We are keeping a close watch on him. He is fine as of now,” added the official. Soumitra Chatterjee took a test for the coronavirus on Monday and got admitted to the hospital after the results arrived. West Bengal chief minister Mamata Banerjee called to enquire after Mr Chatterjee’s health on Monday. She later posted a tweet the same day, praying for the film veteran’s speedy recovery.

Mamata Banerjee, posted a tweet for the legendary actor, which read: “Concerned to hear about the veteran actor Soumitra Chatterjee testing positive for COVID-19. Praying for his speedy recovery and good health.”

Concerned to hear about the veteran actor Soumitra Chatterjee testing positive for #COVID19. Praying for his speedy recovery and good health!

In his six-decade long film career, Soumitra Chatterjee has acted in some of the finest Bengali films like Apur Sansar, the last of the Apu Trilogy, and Sakha Prasakha. He also featured in a number of films by iconic filmmakers like Mrinal Sen, Tapan Sinha.

The 85-year-old thespian has featured in 14 films by Satyajit Ray. He is also a recipient of the Dadasaheb Phalke Award. He made his debut in Satyajit Ray’s 1959 film Apur Sansar. The iconic duo also made films such as Charulata, Devi, Teen Kanya, Ghare Baire, and Ganashatru to name a few.

Other than his iconic filmography, Soumitra Chatterjee has contributed towards art in many forms. He is also a thespian, a poet, a writer, editor and an elocutionist.

(With inputs from PTI)

IRFANhttps://allnewspro.com
Previous articleAmitabh Bachchan Had Conversations About Food With This Contestant
Next articleAbhinav Shukla Picks Immunity Over Wife Rubina Dilaik

Mukesh Khanna as Shaktimaan (courtesy iammukeshkhanna)HighlightsMukesh Khanna said that details will be shared "gradually" He played the superhero in the popular TV...
Read more
Uncategorized

Home is where the party is