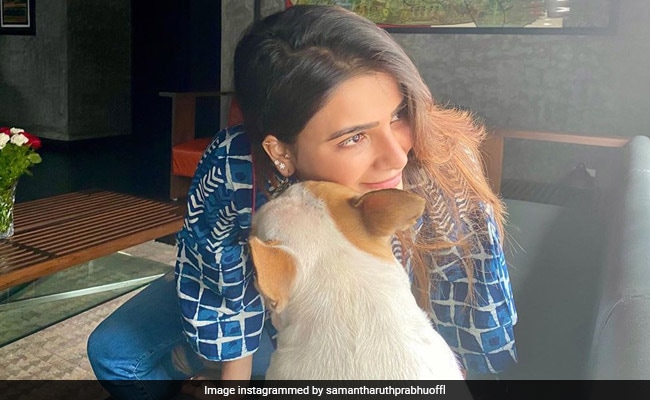 Samantha Ruth Prabhu’s latest picture with her pet pooch Hash is just adorable. The actress, on Wednesday, posted a photo of herself having a paw-dorable moment with Hash and her caption is winning the Internet. In the picture, Samantha can be seen cuddling with her pet dog in what appears to be her home. She looks cute in a blue top and denims. Sharing the image, Samantha Ruth Prabhu wrote: “Those who teach most about humanity aren’t always humans.” We couldn’t agree more with you, Samantha. Reacting to her post, one of her fans commented: “So true!” while other wrote: “The caption is just wow.”

Samantha Ruth Prabhu’s pet pooch often features on her feed. Earlier, she shared a picture of herself chilling with Hash and wrote: “To feel flawless with no filter. To feel magical in your own shoes. To feel confident in your own skin. Cause truly there is no one like you.”

Samantha Ruth Prabhu is married to actor Naga Chaitanya. The duo have worked together in a couple of films like Majili, Manam, Autonagar Surya and Ye Maaya Chesave, which marked Samantha’s debut as an actor in the film industry. Ye Maaya Chesave released in 2010.

IRFANhttps://allnewspro.com
Previous article“Beach Bum” Ileana D’Cruz Is Dreaming Of Her Happy Place
Next articleHere’s What Sunny Leone Did After Her First Day Of Boxing

Mira Rajput Is All About “2000’s Fashion” In This Throwback

Mira Rajput took a trip down memory lane on her childhood friend Aalika's birthday and shared a blast from the past in her...
Read more
Uncategorized