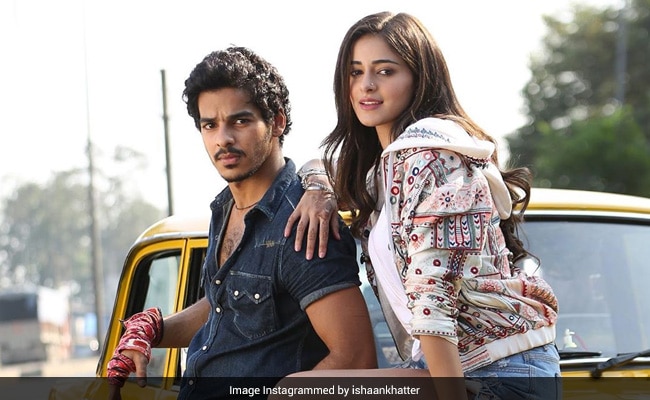 Khaali peeli? Absolutely. There is no rhyme or reason – that is what khaali peeli means – in this Ishaan Khatter-Ananya Panday starrer that thinks – if it thinks at all – being bonkers is the best thing to be. The young lead pair strives hard to achieve some sort of chemistry. The concerted no-brakes act does not quite come off because the screenplay keeps driving the audience around the bend.

Khaali Peeli, directed by Maqbool Khan, is a Mumbai masala movie too manic for its own good. The title alludes to the colours of Mumbai’s taxis but neither the megapolis’ sights and sounds nor the cabs that dominate its busy streets get the play they deserve. Khaali Peeli is not only colour blind, it is tone deaf too. While the backdrop is a blur, the soundscape is an assault on the ears.

A part of the story is set in a whorehouse where neither the khaala in charge of the girls nor the larger-than-life gangster who runs the prostitution business has the looks or demeanour of a sex trafficker. The latter’s henchmen are a bumbling bunch – they are supposed to remind us from time to time that Khaali Peeli is an action comedy. It isn’t much of either – action or comedy.

For reasons best known to the makers, a shiny cloak is sought to be thrown around the crime of trafficking of girls – the film’s female protagonist is one of them, the others we barely see. The business is drained of its prurience and almost normalised.

The focus of Khaali Peeli, playing on Zee5, is on a pair of childhood sweethearts who are reunited by fate on an eventful night of adventure that culminates in a life-and-death clash. What happens between the two ends of the tale is what the film is about.

The young couple is on the run – one from the police after an accidental stabbing, the other from a bunch of goons. The two have to get out of the city before they are nabbed. But how far can they really go if they lose their way in a mela where they pose as entertainers in outlandish outfits and sway to a song tailormade for slowing down the pace of the film?

The boy, cabbie Vijay Chauhan (Ishaan Khatter), wants to get away from Mumbai because the metropolis hasn’t given him a minute of peace – trouble has chased him incessantly in the ten years he has spent in the city. He is a natural born fugitive with the innate wiles of a survivor. “Jab Blackie bhagta hai ussey hawa bhi nahi pakad sakti,” he boasts. Want to catch up with him? Banish the thought. Not worth it.

Khaali Peeli is purported to be a tribute to the formula flicks of yore. Right at the outset, the cabbie likens his “life ki kahaani” to a Bollywood masala movie that begins exactly where it ends. That might sound exciting if you are a fan of Mumbai potboilers. But be warned, do not get your expectations too high. The film overdoses on masala.

The girl, Pooja (Ananya Panday), is fleeing a forced marriage to a much older man to whom she has been promised. Lugging a bag loaded with money and gold ornaments, she hires the taxi that is about to drive away in no particular direction. All the lady wants is to be dropped outside the limits of Mumbai.

Vijay alters the number of his taxi from 6969 to 9696 in the hope of giving the police the slip. The man they have to get off their backs is Inspector Tawde (Zakir Hussain). Somewhere along the way, the hero also runs into a Gujarat cop (Satish Kaushik in a cameo) who is as daft as a brush.

He holds forth on the subject of the uncharitable portrayal of policemen in Hindi movies. He rues that in Dhoom ‘policeman’ Abhishek (Bachchan) wasn’t given his due as he chased ‘criminal’ John (Abraham). This can happen only in films, he asserts. He does not have to go far to gather evidence: he is in exactly one such film.

Khaali Peeli is a love story in the guise of a road movie. Vijay alias Blackie had to leave his hometown of Shivpuri after a botched jewellery shop heist a decade ago, and Pooja, a young girl trafficked to a Kamathipura brothel before she was ten years old, tells the boy that she is Red Riding Hood when the former explains to her the origin of his own name.

The energy that you expect from a film featuring a youthful lead pair does not acquire any sort of consistency given the unevenness of the screenplay. It flits back and forth in time, sometimes by years, at other by hours and minutes, and delivers a bumpy ride.

If anybody is looking for depth in Khaali Peeli, the film takes half-hearted stabs at feminism. It will have us believe that the heroine is a feisty girl who knows her mind. Scratch the surface and you see her for what she is – a woman who is happy to be pushed around. But, for form’s sake, when the hero claims ownership over her, she shoots back: Baap ka maal lagti hoon? That question is as random as everything else in Khaali Peeli.

In the climax, the film allows the girl to have a piece of the action lest we wind up with the feeling that she is a mere damsel in distress in need of a rescue act. She hurls a few punches of her own at the villain but fails to make any meaningful point. Mere mimicry of men counts for little.

Swanand Kirkire is wasted in a walk-on part but Jaideep Ahlawat and Satish Kaushik (in a cameo as the Bollywood-loving knucklehead in uniform who can never get over the fact that the “Angrezon ke zaamane ka jailor” Asrani was treated so shoddily by “Amit aur Dharam” in Sholay) do have their stray moments.

Khaali Peeli is a soggy affair. The popcorn entertainment it delivers has no crackle. With inanity snuffing out the effervescence Ishaan Khatter and Ananya Panday bring to the concoction, the final reading on the meter is ZERO.

IRFANhttps://allnewspro.com
Previous articleFair pay – mumbai guide
Next article“My Life Is Not A Fairytale”

History is not always written on paper. Sometimes, you see it on your screen or hear someone narrate it....
Read more
Uncategorized

It all began over 40 years ago with a couple taking turns every Sunday to cook a meal for...
Read more